The relationship between cannabis and the brain is a meaty subject. Identifying the various ways cannabis affects the brain is complicated, and we’ve only just begun to unravel many of the mysteries. Most perplexingly, there’s a lot of seemingly contradictory evidence out there.

On the one hand, we’re inundated with messages that cannabis impairs a user’s cognitive function — particularly short-term memory. On the other hand, we hear cannabis can act as a neuroprotectant, perhaps even preventing the onset of neurodegenerative diseases like Alzheimer’s.

How can this be? Cannabis is a diverse, complex plant comprised of hundreds of chemicals. And, two of its most prominent constituents — THC and CBD — affect us in significantly different ways. But, first, let’s start with an explanation of the endocannabinoid system, or ECS.

What is the Endocannabinoid System and Why is It Important?

The ECS, also known as “the body’s own cannabinoid system,” is a group of cannabinoid receptors located in the brain and throughout the central nervous system (CNS) and peripheral nervous system (PNS). It plays a vital role in the regulation of mood, memory, physiology, pain sensation, appetite, and overall health. While the ECS performs numerous tasks, its primary goal is homeostasis, or the maintenance of a stable and healthy internal environment.

The discovery of the endocannabinoid system and associated receptors has played a significant role not just in our understanding of cannabis, but of human biology, health, and disease.

Cannabis contains at least 85 cannabinoids, the chemical compounds that interact with the brain’s receptors. The two cannabinoids people are most familiar with include THC and CBD.

THC, which is responsible for most of cannabis’ psychoactive effects, affects the brain by activating cannabinoid receptors, namely CB1. THC promotes creativity, amplifies your thoughts, and keeps you focused…until stimuli distracts you to a tangential thought (good for philosophical conversations, but for studying, not so much!).

Surprisingly, THC’s (largely) non-intoxicating sibling and the second most studied constituent in cannabis, CBD, shows little affinity to bind to either CB1 or CB2; instead, CBD seems to indirectly stimulate cannabinoid signaling by suppressing the enzyme that breaks down anandamide. This partly explains why CBD appears to counteract some of the effects of THC, and why higher CBD concentrations result in fewer intoxicating effects. Like THC, CBD also plays an important role in appetite, the immune system, and pain management.

The Biphasic Effect: Why Proper THC Dosage is Important

The effects of cannabis vary by individual and are highly dependent on dosing and form of preparation (e.g., vapes, edibles, etc.). It’s important to note that like many chemicals, cannabinoids — THC in particular — have a biphasic effect, meaning low and high doses can have opposite effects in users. This is partly why many people may feel relaxed with low doses of cannabis and paranoid under high doses. Most medical marijuana practitioners advise patients to start with a low dosage and gradually increase dosage as the patient determines how their body reacts. This process is known as “self-titration.”

Another way to think of the biphasic effect is as a therapeutic window. Cannabis has a narrow therapeutic range, meaning the difference between the optimal dosage that elicits the effect one desires versus a dosage that creates adverse effects can be subtle. Take chronic pain as an example: most studies of cannabis and chronic pain report that patients find relief in low to moderate doses of cannabis, but may find pain exacerbated when the dosage is too high.

Further complicating the issue is that THC and CBD levels — as well as THC:CBD ratios — can vary dramatically from strain to strain, so it’s important for people to be conscious of these levels as they find the most appropriate dosage to treat their condition.

The same goes for lifestyle users who may find they have a preference for a particular strain. One strain may make them feel overly drowsy or anxious, while another may make them feel relaxed and happy. Everyone’s body chemistry is different, so how one responds to cannabis can vary dramatically.

Circling back around to the question posed at the beginning of this article, why is there so much seemingly contradictory or paradoxical evidence (e.g., cannabinoids “protect” or “impair” cognitive function) on how marijuana affects the brain?

“Frustratingly, we have very few high-quality human studies that examine the potential long-term benefits or negative effects of cannabis consumption on the brain. But, just like cannabis has biphasic acute effects, the same may hold true in long-term usage,” says Dr. Hart. “Too much, too often, over a long period of time, could cause negative effects like diminished verbal memory recall; while the right amount and right frequency could elicit the benefits we’ve found in early studies on animal models, such as neuroprotection and the slowing or prevention of neurodegenerative disease.” 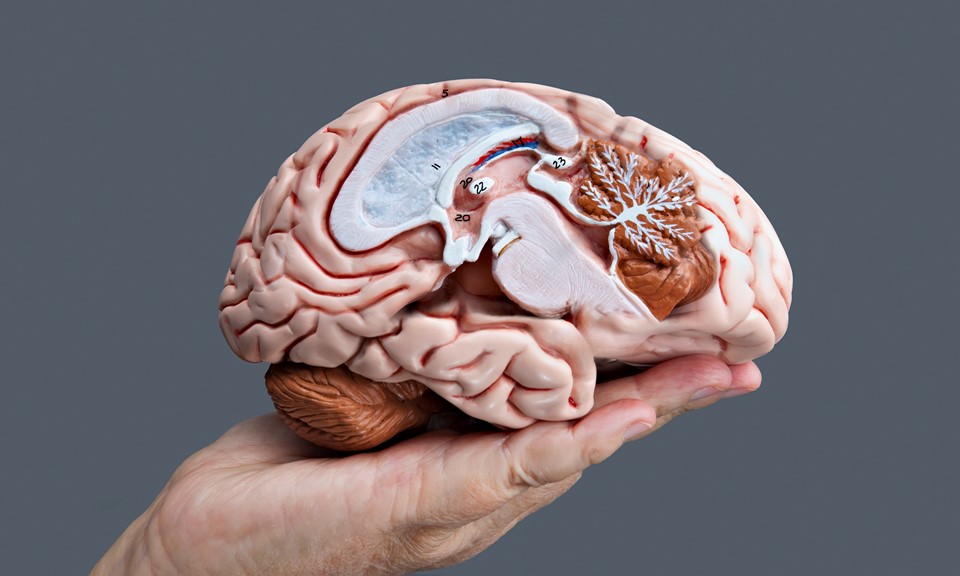 Traumatic Brain Injury, or TBI, is a serious condition usually caused by an external blow to the head that can cause severe and often chronic symptoms. These symptoms can be cognitive, behavioral, movement related, speech and visual impairing, mood altering, involve painful headaches, and even cause gastrointestinal issues.

Each year in just the U.S., nearly 52,000 people die from TBI and 80,000 sustain severe disabilities. Compare that to car fatalities (32,675) and homicides (14,196), which combined claim fewer lives. Moreover, 5.3 million people in the U.S. live with TBI-related disabilities, a number comparable to those living with Alzheimer’s disease.

While effective therapies to treat ongoing TBI symptoms have been difficult to come by, thanks to researchers like Prof. Yosef Sarne of Tel Aviv University, we’ve discovered that cannabis may prevent long-term brain damage by administering THC before or shortly after the injury. In fact, Israel Defense Force (IDF) practitioners administer CBD or low-dose THC as a first-line treatment to IDF soldiers – and even enemy combatants – who suffer brain trauma.

Sarne and his team published their results in 2013, where they demonstrated that administering just a fraction of the amount of THC that would be found in a typical cannabis joint anywhere from one to seven days prior to, or one to three days after an injury, induces the biochemical processes necessary to protect critical brain cells while preserving long-term cognitive function.

Given the success found in Israel utilizing cannabis to halt TBI in its tracks, it begs the question: can cannabis help persistent TBI symptoms?

Anecdotally, many patients and their families report success. The daughter of one patient wrote in a Reddit forum:

“My father suffered severe TBI for years. He used to sit around hating his life all day. Once he started using marijuana, he changed a lot. He was able to get off some of his meds, start eating more, go outside, enjoy music, laugh at a movie, sleep at night, less anxiety in the day, less body pain. The list goes on and on.”

We hear many success stories like this, but these are, of course, anecdotal. Thus far, there aren’t any notable clinical trials demonstrating the efficacy of cannabis to treat ongoing symptoms in TBI patients. Unfortunately, even outside of cannabis research, phase II/III clinical trials of potential treatments haven’t demonstrated any consistent improvements in outcomes.